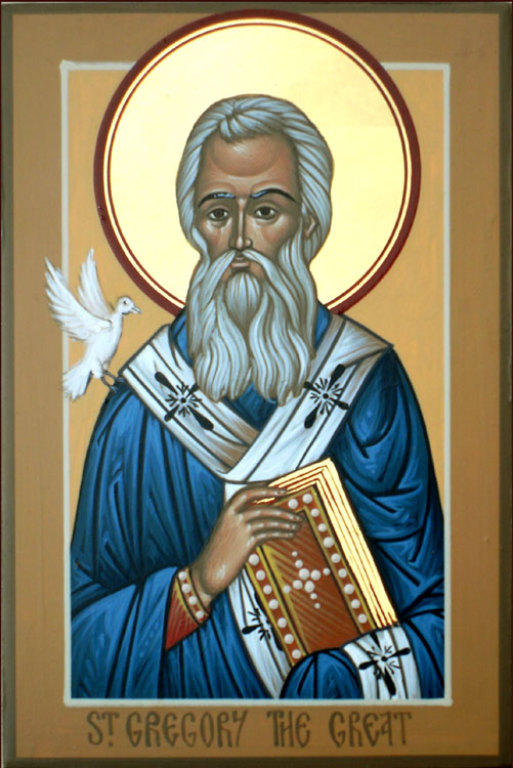 Gregory was the prefect of Rome before he was 30. After five years in office he resigned, founded six monasteries on his Sicilian estate, and became a Benedictine monk in his own home at Rome.

Ordained a priest, Gregory became one of the pope’s seven deacons, and also served six years in the East as papal representative in Constantinople. He was recalled to become abbot, but at the age of 50 was elected pope by the clergy and people of Rome.

Gregory was direct and firm. He removed unworthy priests from office, forbade taking money for many services, emptied the papal treasury to ransom prisoners of the Lombards and to care for persecuted Jews and the victims of plague and famine. He was very concerned about the conversion of England, sending 40 monks from his own monastery. He is known for his reform of the liturgy, and for strengthening respect for doctrine. Whether he was largely responsible for the revision of “Gregorian” chant is disputed.

Gregory lived in a time of perpetual strife with invading Lombards and difficult relations with the East. When Rome itself was under attack, he interviewed the Lombard king.

His book, Pastoral Care, on the duties and qualities of a bishop, was read for centuries after his death. He described bishops mainly as physicians whose main duties were preaching and the enforcement of discipline. In his own down-to-earth preaching, Gregory was skilled at applying the daily Gospel to the needs of his listeners. Called “the Great,” Gregory has been given a place with Augustine, Ambrose, and Jerome, as one of the four key doctors of the Western Church.

An Anglican historian has written: “It is impossible to conceive what would have been the confusion, the lawlessness, the chaotic state of the Middle Ages without the medieval papacy; and of the medieval papacy, the real father is Gregory the Great.”

Gregory was content to be a monk, but he willingly served the Church in other ways when asked. He sacrificed his own preferences in many ways, especially when he was called to be Bishop of Rome. Once he was called to public service, Gregory gave his considerable energies completely to this work. Gregory’s description of bishops as physicians fits in well with Pope Francis’ description of the Church as a “field hospital.”

Saint Gregory the Great is the Patron Saint of: